My Junior year of high school, inspired by Pinterest, I took an orange piece of chalk and scripted a short message in large letters onto the right wall of my closet.

“What would you attempt to do if you knew you could not fail?”

Seriously– what would you attempt?

Throughout my junior and senior year, I stared at that orange quote every single time I opened my closet door (which was actually a lot since most of the time my closet was so messy the door wouldn’t shut, so I just left it open). Convicted by the quote I found on Pinterest that was now etched into my closet wall, I decided that if I knew I couldn’t fail, I would attempt to run Track and Cross Country at The Ohio State University. I wanted to be a Buckeye. The only problem was that, at the time, I was a 2:15 800 meter athlete and 19:06 (at my best) Cross Country athlete… not exactly close to the 2:05 800 women and 16:50 5k women that were currently on OSU’s team. I had a pretty lofty goal for someone in my position. I emailed the coach anyways and basically begged him to take a chance on me… and by the grace of God– he did. I worked my tail off my senior year of high school and eventually ran 18:21 in the 5k and 2:11 in the 800. One official visit later and I had my spot on the team.

That experience my senior year of high school with taking chances, setting my sights high, and dreaming of really big extravagant goals was my first experience with chasing dreams at a different level than most are willing to chase. And through that process, I learned that being willing to set really big goals and take some pretty huge risks was a pre-requisite to actually chasing dreams.

Since my senior year of high school, my list of dreams– things that I would attempt to do if I knew I would not fail, has grown tremendously. Some are silly, some are more serious, but they all are dreams– dreams that I am willing to take the time and take the risks to make happen. If I knew I would not fail, I would build my own house from the ground up. Obviously I would want to complete the perfect cartwheel. I would start my own company. Much to my Mom’s delight, I would completely organize all of my personal spaces (car, room, closet, etc.) in a way that actually works for me. I would “Jill Kanney” it (Jill was one of my awesome college teammates– and yes, Jill, your name has been used in the context of a verb) and actually learn how to play the guitar and not just pluck the strings. I would put myself in a position where I would get to race against the best middle distance athletes– not just from the United States– but from all over the world. And in doing so, I would put myself in contention to make the 2020 Olympic Team and represent the USA in Tokyo. Through all of this, my desire would be to live every day as if it were an important part in a very very large adventure.

I’ve been working on those last three on my list this entire summer. Running. Racing. Adventuring. After finishing up my college career at the NCAA championships out in Eugene, I decided to stay in Oregon and race a couple races in Portland. My Portland Adventures, as I have been referring to them, were my first experience of traveling, racing, and competing as a post collegiate. It was different. Scary. Weird. I didn’t have a coach. Or teammates. I didn’t even have a place to sleep the first night that I decided to stay out there. I cried to my Uber driver, Teri (I still remember that kind woman’s name) because I felt completely, utterly, and totally alone– 2,438.9 miles away from the place I called home. 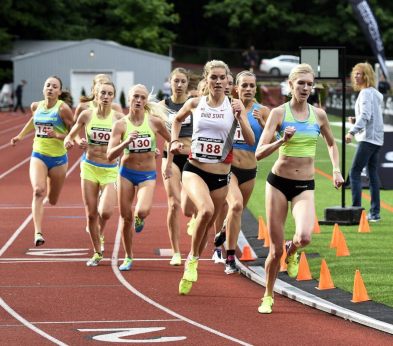 Racing Some 800 meter races in Portland back in June. PC: @tafphoto & @highperformancewest

I felt as if I had made a huge mistake. I heard the voices in my head whispering, “you’re not good enough. You won’t make it at this level. Everybody else knows what they are doing. If you can’t even pull yourself together in Portland, what happens when you travel outside of the United States?”

Jesus gives us the ability to silence those voices and replace them with His truth. His truth that we are loved, cared for, valued, and important. His truth that the adventures that He takes us on are opportunities for us to chase and pursue our dreams if we only allow Him to take us to places out of our comfort zone. This risky place of being out of our comfort zone is the same place where our actions start to intersect what we would attempt to do if we knew we could not fail. I lived in that place that week I spent in Portland. In fact, I lived in that place for most of the summer. Taking risks. Taking chances. Chasing a dream.

For years I had always watched the US Championships from my couch in Columbus. I would secretly pull for Brenda Martinez, an athlete I have looked up to since I started my running career. This year during the US Championships, I was no longer on my couch– I was stepping up to the line with Brenda. 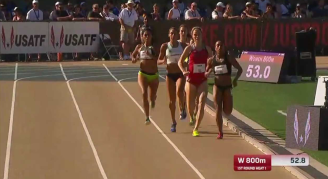 Racing at the USATF Championships in Sacramento, CA.

This year during my free time, I was no longer looking up results on Flotrack to see what the results of summer races were– I was actually racing them. This year during the summer, I was no longer comforted with the safety and security of being in Columbus, Ohio all of the time– I had the opportunity to travel around the country. So that’s how I spent my summer. Chasing dreams and living an adventure as if I didn’t know what the word failure (Or the word, “No,” S/O to all the awesome elite race and meet directors out there for giving me a spot on the line:) ) meant. And that is what I plan to continue to do. My favorite author, Bob Goff, writes it best.

“What’s your next step? I don’t know for sure, because for everyone it’s different, but I bet it involves choosing something that already lights you up. Something you already think is beautiful or lasting and meaningful. Pick something you aren’t just able to do; instead, pick something you feel like you were made to do and then do lots of that. You weren’t just an incredible idea that God never got around to making. The next step happened for the world when God dropped you on the planet. You’re here and I’m here. God decided to have us intersect history, not just at any time, but at this time. He made us to be good at a few things and bad at a couple others. He made us to love some things and not like others. Most of all, He made us to dream. We were meant to dream a lot. We’re not just a cosmic biology experiment that ended up working. We’re part of God’s much bigger plan for the whole world. Just like God’s Son arrived here, so did you. And after Jesus arrived, God whispered to all of humanity…”It’s your move.”” – Bob Goff, Love Does

My move this summer has been to dream it, chase it, and believe it. Just as Bob talks about. And I believe that in doing so, God has shown me that every day truly is an important part in a very very large adventure. He has reminded me that He is the author

of my adventure. He has reminded me that He has already planned out the future. God knows who is going to Tokyo (and Paris and L.A. … and every Olympics here on out until forever). God knows the races set out ahead. And He has reminded me that I am loved and cared for regardless of whether or not I become a sub 2:00 800-er next season or I hang up my spikes tomorrow (although that hanging up the spikes part isn’t gonna happen for a while… but still– he will love me then as well). Regardless of outcomes, I am loved.

The really cool part about resting in that truth is that it gives us the freedom to really and truly live our adventures. To take risks. To throw caution to the wind, step up to the line, and say, “I’m all in. I’m gonna do this.” Because with Jesus, we are never viewed as a failure. We are viewed as strong and important people that bring value to whatever place we are in.

Through God’s eyes, we will never fail.  This gives us the ability to attempt to do things and dream things that require a lot of effort and a lot of laying our pride and insecurities down and taking chances. It’s telling that voice in our heads to “SHUT UP!” because we ARE worth it. We DO matter. And we were created CAPABLE. So here’s to dreaming big taking chances, and enjoying the entire adventure. Because I want to live my life attempting to do the things that I would do if I knew I could not fail, and I intend on chasing the dreams that God has put on my heart…

… My hope is that you will choose the same:)

End Note: I am dedicating this post to my college teammate Jill Kanney who has taught me how to dream it boldly, chase it fiercely, and believe that The Lord will take care of the rest. #dreamChaseBelieve

My Tweets
Running With RunRach
Blog at WordPress.com.
Loading Comments...