“Go get em, Rach. He who promised is faithful.”

This is the text message that I woke up to on Friday morning– the Day I raced the NCAA Regional final. It was sent to me by an old high school teammate (Shout-Out to Robbie Daulton). Two simple sentences. Nine words total. But it was exactly what I needed to hear in that moment.

He who promised is faithful. 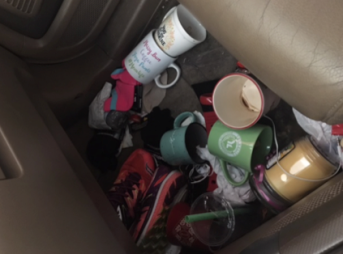 Litterally, this was my car last week. I’m imperfect. I’m messy. But Jesus still loves me.

He came through. He has. He does. And He always will. Because He who promised is faithful. And my messy car and messy life will never be too much for Him.

I needed to be reminded of that on the morning of the Regional Final. I needed to know that no matter what happened that day during the 800 meters that I was out there racing, I could trust that Jesus was going to give me the strength to fight, because He promised, and He is faithful. And the words in that text reminded me of that truth exactly.

A lot of you guys know (since I reference it so often), but my current favorite book is Love Does by Bob Goff. I’ve read it twice now cover to cover, and I’m getting ready to read it for a third time because it is fantastically amazing. I think I actually laughed more at Bob’s little anecdotes and side stories about life the second time I read it, which I don’t even know how that’s possible– but it happened!

Anyways, there is a chapter in the book that I thought about this weekend when I received so much encouragement and truth from amazing and wonderful teammates (old, current, and new), friends, and family. In this chapter, Bob talks about how people are able to use their words to launch each other. And he talks about how we just have to be ordinary people to use our words to have an impact on someone else’s life.

“Words can launch us. We don’t need to be a dean to say words that change everything for someone. Instead, God made it so that ordinary people like you and me can launch each other.” -Bob Goff

That’s what the words in that text message did for me– they launched me! God used the text that read, “He who promised is faithful” to launch me in the direction my mind needed to be headed for that day. In fact, there were so many words that people used this weekend to launch and support me. And while you all are far from ordinary (as the way this quote is worded may suggest), you all have used your words to help launch me. And that is something that I am incredibly grateful for.

I share this with you, because it all sounds quite ordinary. But like I said, I think that God wants us to launch each other so that ordinary people can accomplish the extraordinary. We are more than  Just another. God intended for us to be more than just another. We were fearfully and wonderfully made. And we have the power of The One who faithfully promised walking right alongside us. But sometimes, we need to be reminded of that. Sometimes, we need to be launched.

I’m thankful for the “people launchers” in my life. I’m thankful for those who have used their words to encourage me and launch me– especially the past couple of weeks! Seriously, you all rock and are amazing. Your words have helped me to experience the fact that God is able to take an ordinary person like myself and use me for something that I didn’t really count myself to be used for when I was a senior in high school.

I want to be a people launcher, too. I used to think I was just another. But now I know that God does not intend that just another life for any of us. He wants us to live boldly. He wants us to take risks. He wants us to launch people and be launched by people. My hope is that the 2:02.67 along with that automatic Q makes someone else who also thought that they were just another believe that God made them for more than just blending in with the background. Maybe it’s not with the 800. Maybe it’s not even with running at all. But it’s something. It’s definitely something. Because none of us are, just another.  All of us were made for something. And all of us are able to use that something to launch someone else.

Side note: I made my teammates take this picture because literally for my entire running career (so 10 years now), I’ve wanted this picture but everyone is always too embarrassed to take it. They agreed to take it (FINALLY YES), but it should be mentioned that they definitely were coerced into it. Anyways, here is a picture from the weekend with probably the best running pun ever created. Thanks Christine and Em for being part of the shennanigans:)

Em and Christine, one day you both will thank me because you can use this photo to embarrass your kids:)

My Tweets
Running With RunRach
Blog at WordPress.com.
Loading Comments...